What is a Vacuum Furnace, How Does it Function, And How is it Used?

Teledyne Hastings is working to expand our throughput so that we can better serve our customers by meeting increased demand while decreasing lead times. Over the last several months, we have added and improved calibration systems in both our vacuum and flow production areas. We have also purchased a new vacuum furnace which increases our production capacity. In this blog, we will describe what a vacuum furnace is, how it functions, and how we use it.

A picture of our newest vacuum furnace is shown below.  The three major components of the vacuum furnace, from left to right, are the high-speed diffusion pump, the vacuum chamber with a high temperature hot zone, and the control cabinet. The diffusion pump is capable of pumping 180,000 lpm.  While the pumping speed may seem unnecessarily high for the given volume, keep in mind that the gas load, at high temperature, can be very high. The diffusion pump is connected to the hot zone chamber via a large right angle vacuum valve. The diffusion pump is backed by a rotary vane vacuum pump. Pressures in the foreline can be monitored by using a Teledyne DV-6R vacuum gauge tube. The base pressure of the system, with the heat zone at room temperature approaches 1 x 10-6 Torr. 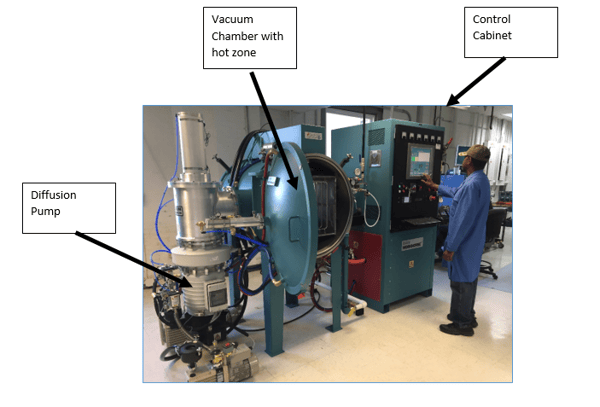 Leon Whitehead at the controls of the new vacuum furnace.

The hot zone is the heart of the vacuum furnace. A picture showing the inside of the hot zone is shown below. The effective hot zone size is 12”w x 12” h x 24” d. The molybdenum rod elements inside the hot zone are resistively heated once the system has reached sufficient vacuum. Under vacuum, the hot zone can reach temperatures exceeding 1300°C (2372°F). 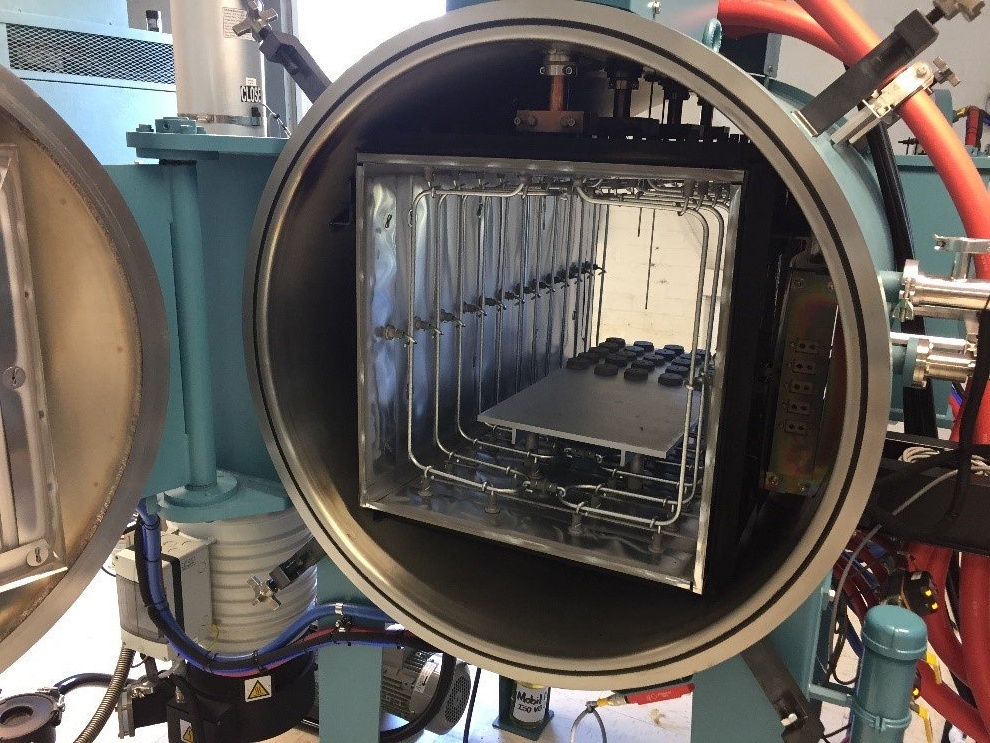 Inside the hot zone. Note the series of Molybdenum rod elements.

The vacuum furnace is controlled by a touchscreen panel with PLC. The operator can select and execute a pre-programmed temperature/time profile for a given task. In addition, pressure and temperature at various locations on the system are monitored and displayed. The control cabinet also includes the transformers, contactors, and fuses.

Teledyne uses our vacuum furnaces for both fusing and brazing operations - all while precisely controlling the environmental conditions within the hot zone. In a typical schedule, the system is pumped out to its base pressure and then the hot zone is brought up to 800°C. After reaching this temperature, the hot zone is held for a period of 20 minutes. Next, the hot zone is slowly ramped to 1100°C, which takes about an hour. The hot zone is then held there for up to 1 ½ hours.

Teledyne Hastings Instruments is an ISO 9001:2008 certified manufacturer and we produce a complete line of instruments for precise measurement and control of vacuum, pressure, and gas flow. Our vacuum furnaces and the corresponding Quality Work Instructions deliver consistent results, which in turn provide our customers with high quality instrumentation. For information on Teledyne Hastings and our Mass Flow Meters and Controllers or Vacuum Gauges, please visit www.teledyne-hi.com or click the button below.

Earlier this year, the applications engineers here at Teledyne Hastings discussed topics for our blog. We all agreed that one of the more frequent questions that we discuss with folks involve the units used to measure vacuum levels. We find the technicians who use their vacuum systems daily often seem to develop a sixth sense about the “health” of their systems. They know something isn’t quite right when the base pressure (or rate of pressure change) is not what they expect. So when pressure measurements are not consistent from batch to batch, that is the time when the user stops to ask the meaning behind the data that their vacuum measurement instrumentation is providing.

Now, most users know that vacuum is commonly measured using units of pressure. There are a few different sets of pressure units and this blog will discuss the more commonly used ones. In Armand Berman’s book, Total Pressure Measurements in Vacuum Technology, pressure unit systems are divided into two categories: “Coherent Systems” and “Other Systems”.

Coherent Systems of Units are based on the definition of pressure (P) as the force (F) exerted on a chamber wall per unit area (A). P = F/A.  The International System of Units, or SI units, is commonly used for pressure measurement. http://physics.nist.gov/cuu/Units/units.html  The SI unit for pressure is the Pascal (Pa). It interesting to note that at NIST (National Institute of Standards and Technology), published papers are always required to use the SI set of units. Again, the SI unit for pressure (force per unit area) is the Pascal. 1 Pa = 1 N /m2.

Now, the Pascal as a unit of pressure is not always the most convenient because vacuum systems are often operating in a range of pressures where we would need to collect data using large numbers. For example, near atmospheric pressure, we would measure approximately 100,000 Pa. So a more convenient unit, the bar, has been derived. (1 bar = 100,000 Pa)

Moving lower in pressure, it is very helpful to then use the mbar (1 mbar = 0.001 bar). So many vacuum users, especially in Europe, use the mbar as the basis for describing pressure levels. As a specific example, look at the base pressure specification of a turbo pump, it will be given in terms of mbar (e.g. Base Pressure < 1 x 10-10 mbar).

Another system of pressure units is based on the Torricelli experiment (shown in the diagram). In this experiment, the pressure exerted on the mercury can be shown to be P = hdg, where h is the height of the mercury column, d is the density, and g is the acceleration due to gravity. 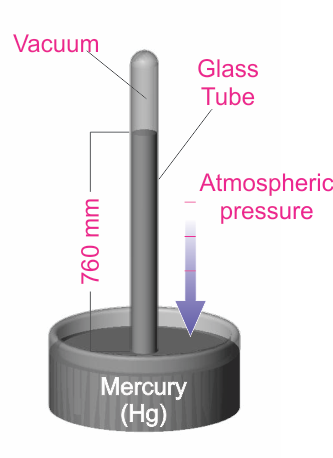 By measuring the mercury column height, the user can determine the pressure. The Torr unit (named for the Italian scientist Torricelli) has been defined to be 1 millimeter of mercury (1 Torr = 1 mmHg). This unit is very common, especially in the United States. It is also common to use the mTorr (1 mTorr = 0.001 Torr). Many years ago, pressure was sometimes described in terms of “microns”, which simply meant a mercury column height of one micron (1x10-6 m). Note that the micron and the mTorr are the same.

One last word about the units used to measure vacuum: on occasion, there is confusion between pressure units. As we have seen above, the mbar and the mTorr are not the same. One mbar has the same order of magnitude as one Torr  (1 mbar ≈ 0.75 Torr).  The table below gives some approximate conversion values. A useful website for conversions:

Douglas Baker is the Director of Sales & Business Development of Teledyne Hastings. Antonio Araiza prepared the Torricelli experiment drawing. Antonio is the head of Technical Documentation at Teledyne Hastings (and is among the best soccer referees in the Commonwealth of Virginia).