Piezoresistive Pressure Sensors and the HPM-760S

In the vacuum world, gauges can be characterized as being either “Direct” or “Indirect”. Direct gauges are so-called because they directly measure the force imparted on some surface. And since P = F /A (pressure equals force per unit area), the gauge is directly measuring the pressure. Some examples of direct gauges would include: Bourdon gauges, capacitance manometers, piezo-resistance gauges (we’ll talk more about this one later in this blog). 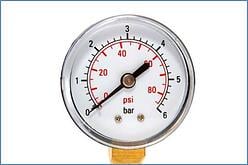 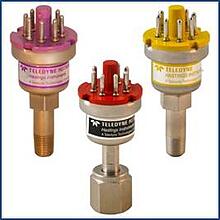 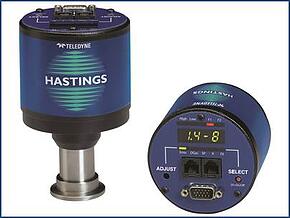 One of the key features of a Direct Vacuum Gauge is that it does not matter what gas in the vacuum is being measured. In other words, if the user has 20 Torr of Argon, Helium, Methane… or Air, a Direct Gauge will read the same pressure. To say it another way, Direct Gauges are said to be Gas Composition Independent.

Teledyne Hastings provides a Direct Vacuum Gauge called the HPM-760S. (It is called the 760 because it will always provide very accurate results at atmospheric pressure.)  The HPM-760S utilizes a piezoresistive sensor. A cutaway drawing of this sensor is shown in the figure below.

In this cutaway, we can see the micro-machined sense die. This die contains a resistance bridge that is made up of piezo-resistors. In a piezoresistor, the resistance changes as force is applied. The resistance bridge sensor is itself in contact with silicone oil that transmits the force from the gas in the vacuum system to the sensor. And, one of the most important things to observe about this sensor is that the only wetted material actually exposed to the gas in the vacuum chamber is 316L Stainless Steel. So to summarize, the gas molecules in the vacuum system exert a force onto the stainless steel diaphragm which in turn imparts a force on the piezo-resistive sense via the silicone oil. 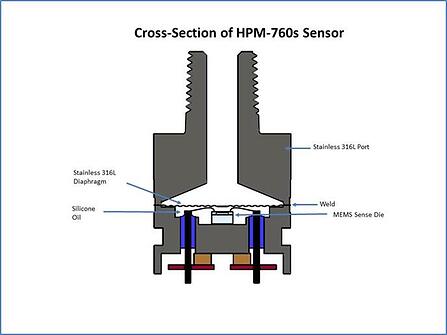 One last thing to mention about our cutaway drawing: the sensor of the HPM-760S is referenced to vacuum. This type of arrangement gives ABSOLUTE readings. Other types of pressure sensors can be referenced to atmospheric pressure (GAUGE readings) or can be connected to another part of the process stream (DIFFERENTIAL) readings.

The HPM-760S is a DIRECT, ABSOLUTE, vacuum gauge. It is an excellent gauge for use on systems that are evacuated using a diaphragm pump. These types of pumps typically operate in the region between a few Torr and atmosphere. And, as mentioned previously, the HPM-760s has only stainless steel exposed (wetted) to the gas in the vacuum chamber. In other words, any gas (including corrosives) which is compatible with stainless steel will be compatible with the HPM-760S. 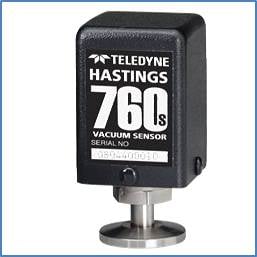 The HPM-760S takes the output from the piezo-resistance bridge and amplifies it for the convenience of the user. At time of order entry, the user can select from four linear outputs.

Two more quick notes about the analog output: First, selection of the 0-10 VDC version makes the conversion from voltage to pressure trivial. As a specific example, at 760 Torr, the voltage output is 7.60 Volt – SIMPLE.  Second, the 4-20 mA output is a good selection in industrial environments that might have lots of electrical noise/interface or where the pressure signal must be transmitted long distances  (>25 feet or 10 meter).

In addition to the linear outputs, the user can also select from several common vacuum system connections: 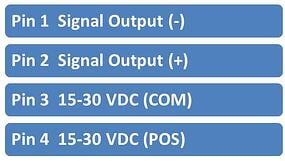 In some cases, a user might like the convenience of having a readout preconfigured for the HPM-760S. The THCD-100 (shown below) can be quickly attached using the CB-760S-THCD cable. In this scenario, the user not only gets a power/display module, but the THCD-100 will also provide dual process control relays. The THCD-100 can be easily connected to a computer or PLC via RS232. And finally, by using the DisplayX software (free) for the THCD-100, the user can also easily collect and log data to a spreadsheet.

This blog was prepared by Will (Iron Man) Harrison and Doug Baker. Will runs at least two marathons per year – this Fall, Will is going to run his first New York City Marathon.

The entries in these blog pages are intended to provide helpful knowledge regarding vacuum gauges, vacuum instruments, gas mass flow meters, and flow controllers. But we could not pass an opportunity to celebrate an anniversary of sorts – on January 30th, 1968, Teledyne and Hastings - Raydist, Inc. announced that Teledyne would acquire the Hastings - Raydist company. According to the announcement in the Wall Street Journal, Hastings shareholders would receive one share of Teledyne stock for each 2.98 shares of Hastings – Raydist stock. So Hastings has been a part of Teledyne for 45 years… The history of the Hastings Instruments Company stretches all the way back to 1944. Next year, Hastings will celebrate its 70th birthday. But while we are in a corporate history mood, it might be fun to recall everybody’s favorite Hastings’ story:  In 1967, Hastings vacuum sensors were designed to travel to the moon and back. One of the objectives of the Apollo missions was to bring lunar samples back to earth. Special boxes, fitted with Hastings vacuum thermocouples were designed and built by Oak Ridge National Labs. Each box was required to be vacuum sealed; the Hastings thermocouple ensured that the seal was good before launch, and after splash down. The box and sensor worked perfectly.  Today, the thermopiles from the Apollo 14 mission are on display on a wall between one of the company’s conference rooms and a hallway. A magnifying lens and lamp installed in the display allows visitors to see the vacuum sensor.

Today, Hastings Instruments is part of the Instrumentation Segment of Teledyne Technologies Incorporated (NYSE: TDY). The Instrumentation Segment provides measurement, monitoring and control instruments for marine, environmental, scientific and industrial applications. The Segment also provides power and communications connectivity devices for distributed instrumentation systems and sensor networks deployed in mission critical, harsh environments.  A complete history of Teledyne is given in Dr. George A. Robert’s book, “Distant Force – A Memoir of the Teledyne Corporation and the Man Who Created It”.

We welcome your comments on this history topic. Please complete the form below:

Douglas Baker used his first vacuum gauge while an undergraduate physics major at Indiana University of Pennsylvania. In graduate school at William and Mary, Teledyne Hastings vacuum gauges monitored the forelines in the vacuum systems in the atomic and molecular lab where he worked. Today, Doug is the Director of Sales & Business Development at Teledyne Hastings Instruments and he can be reached at dbaker@teledyne.com